The mosaic of Louisiana culture shimmers with jazz, big band, blues and zydeco; colorful and boisterous Mardi Gras celebrations and quaint cottages with secret gardens; French, Spanish, English, German, Italian, African and native American ancestry; and two of the most exciting cuisines in the world: Creole and Cajun. Creole and Cajun cookery are often thought of in tandem -- and for good reason -- though there are distinct differences.

Creole cookery grew out of the area's well-to-do 18th century farmers' desire to develop a grand cuisine. Many of these farmers were of European descent; the cuisine relies in part on classic French cooking techniques and Spanish seasonings, as well as African American influence. Gumbo, for example, is a Louisiana tradition whose origins are based in the French soup, bouillabaisse.

Spanish paella evolved to become another of the region's favorites, jambalaya. Ancestral Germans brought pigs, chickens, and cattle to the region, providing a regular supply of ingredients that are now considered staples in Creole cuisine: milk, butter, and sausage. Native Americans introduced new settlers to local produce such as corn, as well as other ingredients such as sassafras leaves (filé powder, when ground) and bay leaves. Africans contributed "kin gumbo" (okra), which they brought with them to the new land. Each ethnic group made a contribution of ingredients and cooking methods, creating one of the most unique and flavorful cuisines in the world. 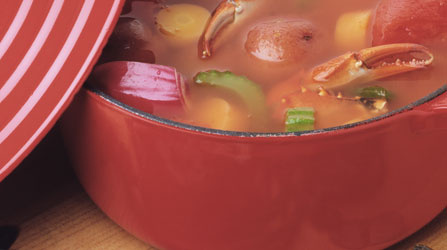 Cajun cooking also reflects a strong heritage. The descendents of French refugees from Acadia (Cajun country), Canada, Cajuns (a shortened version of the French word "acadien") lived off the land and befriended the Native Americans, Spanish and Germans in the area. They lived in the swamps and bayous of southern Louisiana, where an abundant supply of fish, shellfish, and wild game became their dietary staples. Theirs is a hearty country food, born of difficult living conditions and heavily dosed with a desire to comfort. Many are peppery one-pot creations like jambalaya, stews, soups and gumbos.

Both Creole and Cajun cooks are adept at using what's on hand and experimenting with seasonings and other ingredients. The result is that the dishes are always unique -- no two gumbos are exactly the same, though all, like the culture, are rich and delicious.

When it comes to seasoning, Creole and Cajun cooks agree that a dish should be flavorful, but not so spicy hot as to detract from the melding flavors of the ingredients.

Here are some of the main seasonings used judiciously in Creole and Cajun cooking:

For ease in creating Cajun and Creole dishes, you'll want to keep a variety of spice blends handy.

Cajun and Creole dishes are often prepared using what's on hand at the time, but there are a few key ingredients that help recreate the distinctive flavors of the Louisiana region.

White flour, corn flour, cornmeal, rice and beans (red beans and black-eyed peas are a must)

Crab, shrimp, catfish, redfish, oysters, sausage (especially Creole boudin, a highly seasoned pork and rice sausage, and Cajun andouille, a spicy smoked sausage made with pork and garlic), rabbit, chicken and smoked tasso (a dried, heavily smoked pork or beef seasoned with cayenne pepper, garlic and salt that's used as an hors d'oeuvre or to season vegetables, gumbos, and soups.) You can add a special touch of authenticity with regional fare like crawfish, frog legs and alligator.

Chicory has a mild, sweet, caramel-like flavor. Add it to coffee for added body and aroma, or use it to make an authentic beverage of its own. It's available as a root and also in roasted, granulated form.

Often, the best way to learn is to just dig in -- and that's especially true of Cajun and Creole cooking, which relies on ingredients you have on hand, personal tastes and preferences, and a willingness to be a little creative and experimental. No two cooks will prepare a traditional Louisiana recipe the same way, and more often than not, the "recipe" will be "a little of this, and a little of that." So, maybe you'll want to just get out your cast iron pots and skillets, put on a little Zydeco music, and have at it! But if you'd like a little more structure to your cooking, we have a vast repertoire of Cajun and Creole recipes you can try.