What's the difference between cinnamon and cassia?

While the names cinnamon and cassia are often used interchangeably—and the plants are related—there are botanical and practical differences. Cassia is reddish-brown and pungently sweet; it's grown primarily in China, the Indonesian islands and Vietnam. (The outer bark isn't removed during the harvesting of cassia.) True cinnamon (Cinnamomum verum), on the other hand, is buff-colored and mild; it generally comes from Sri Lanka (ancient Ceylon, from which it gets its name) and the Malabar Coast of India. Ceylon Cinnamon is considered a more complex flavor, spicy rather than sweet, with woody undertones. Each holds its place in various ethnic cuisines and kitchens. Most of the powdered cinnamon sold in supermarkets today is cassia.

Which spice blends include cinnamon?

It depends on the cook developing the blend, of course, but because it complements so many foods and other spices, you can find cinnamon in many spice blends, such as curry powder, garam masala, sambhar powder, and five spice powder. Baking blends like apple pie spice and pumpkin pie spice, as well as many pickling blends, seafood boil blends, tea blends (like Chai), and mulling spice blends also rely upon cinnamon. 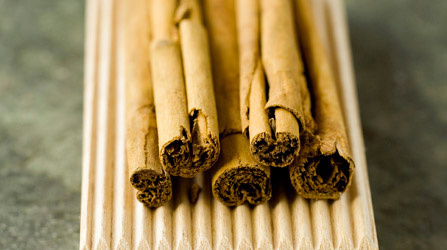 Here's a summary of the types of cinnamon we offer:

Frontier's Vietnamese cinnamon (Cinnamomum loureirii) is harvested in the mountainous regions of North Vietnam from trees that have matured at least 20 years. Its pungent aroma and rich flavor is the result of the high oil content; we purchase cinnamon cut from the base of the tree, where the highest concentration of oil is found. Formally known as Saigon cinnamon, this special variety has rebounded in popularity in the U.S. following a long absence. Compared to Indonesian types, Vietnamese cinnamon has a distinctly sweet flavor and an exceptionally high volatile oil content. Gourmet cooks rate it as the highest quality cinnamon in the world.

Chinese cinnamon posseses characteristics similar to those of Vietnamese cinnamon, but with a less intense flavor. In China, the bark is typically peeled from the trees starting at 10 years of age and continuing as long as 30 years.

We also offer Cinnamomum verum, or "true cinnamon," from Sri Lanka. This cinnamon is native to Sri Lanka (though grown in India, the East and West Indies, and Central America). The cultivated variety grows 8 to 10 feet and resembles a shrub rather than a tree. Most of the product in the U.S. is sold in the stick form.

The most commonly found cinnamon in American kitchens is Indonesian cassia. It is sourced from higher elevations and is harvested a bit earlier than Chinese and Vietnamese cinnamons. Korintje translates as “thick quill” and is judged for quality based on the part of the tree that is harvested (trunk vs. branch) and on the length of the bark peeled from the tree. Our Indonesian cassia (Cinnamomum burmanii) — considered the most flavorful in the world — comes from Mt. Korintje in Sumatra, where the altitude contributes to the spice's intense, reddish-brown color and strong flavor.

Chances are good that if you were asked—out of the blue—to name a spice, your response would be cinnamon. An impetus for the earliest trade route expeditions and a staple in the modern spice rack, the long-standing prominence of this earthy rich, delicious seasoning is indisputable.

Cinnamon comes from the inner bark of an evergreen in the bay laurel family (Lauraceae). As the bark is laid to dry in the sun, it curls into quills (cinnamon sticks). These quills are sorted for quality, and chips are produced by breaking up large quills with a machine. Most often, though, cinnamon is used in its ground form.

Widely employed in the fragrance and cosmetic industries, you'll find cinnamon in incense, dental products, makeup and perfumes. But it's real claim to fame, of course, is in the kitchen.

Here are a few cinnamon-lover recipes—one sweet, one savory, and one very comforting beverage.

Note: Cardamom is a wonderful flavor but can easily overpower a dish. Start on the low end with an 1/8 teaspoon or slightly less then taste and adjust from there.

Whether eaten for breakfast, as an afternoon snack or for dessert, this baked grapefruit recipe makes the perfect sweet treat. Broiling grapefruit brings out a sweet and less tart flavor that's enhanced by the cinnamon and maple syrup.

Better than the corn syrup-filled candy box, this popcorn has maple-cinnamon sweetness, cayenne spiciness and is altogether addicting.