At once hot and spicy, cool and soothing, sweet and sour, bold and subtle— Thai cuisine is a brilliant balance of colors, tastes and aromas. In one dish, for example, the Thai cook might meld an array of hot chili peppers and pungent spices with sweet, exotic fruits or fresh seafood, smooth coconut milk, and bright herbs like mint and lemongrass. 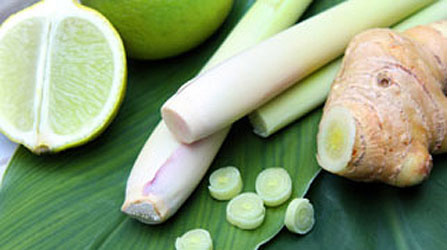 Most of the ingredients found in Thai cuisine are a clear reflection of the environment—warm, fertile land and abundant water. Recipes rely on seafood, exotic fruits and vegetables, several types of noodles and sauces. Rice is the mainstay of most meals, providing a perfect balance to the wide variety of tastes and colors that surround it. Spicy seasoning combinations are used to flavor everything from the day's catch to simple servings of rice or noodles.

Thai cuisine will appeal to any cook who loves the art of seasoning. And while many dishes are very hot, those prepared at home can be adjusted to just the right degree for your own tastes. Here are some of the main seasonings used in Thai cooking:

If you enjoy Thai cuisine, you'll want to be sure to stock up on Thai Seasoning Blend, Curry Powder, Garlic Pepper, Garlic Salt, Lemon Pepper and Veggie Pepper.

Jasmine, sweet, and black rice; bean noodles; banana leaves (for wrapping); coconut; eggplant (or aubergine); and dried mushrooms are all key ingredients in Thai kitchens. Shitake mushrooms are available in convenient, dried form, so you can always have them on hand. To reconstitute, simply soak them in water for an hour or two. Or just add them directly to a long-cooking soup or stew.

Garlic gadgets, grinders and graters, mills and shakers, mortars and pestles, and a vegetable chopper might all come in handy when cooking Thai recipes.