“Nooch” or nutritional yeast is a kind of culinary yeast used in everything from popcorn seasonings to non-dairy cheese substitutes.

“Nooch” or nutritional yeast is a kind of culinary yeast used in everything from popcorn seasonings to non-dairy cheese substitutes. To get technical, it’s a strain of Saccharomyces cerevisiae that’s been deactivated so it can’t leaven dough.

While nooch won’t make your bread big and fluffy, it still has a few tricks up its sleeve — the process of deactivating the yeast breaks down proteins that release glutamic acid, a flavor-enhancing compound that gives nooch its mouth-watering umami flavor (more on that later).

As its name suggests, nutritional yeast is chock full of beneficial vitamins, proteins and other nutrients. It’s also naturally gluten-free and contains no fat or cholesterol, making this magical umami-bomb-in-a-jar a health-conscious treat you can feel good sprinkling on soups, salads and snacks.

Nutritional yeast has a satisfying flavor that goes beyond what you might consider savory. We call this umami — one of the fundamental tastes along with sweet, salty, sour and bitter. If you’re a fan of soy sauce, tomatoes or parmesan cheese, then you’ve already tasted umami in action. It can be described as deep, rich or even meaty — and it’s all due to the presence of glutamic acid, the only known compound to impart umami flavor.

To some people, nooch tastes cheesy or nutty. To others, it’s a little more earthy. Its unique profile can be hard to pin down, but it’s easy to recognize once you’ve tried it. Apples taste like apples — and, well, nooch tastes like nooch.

NOT JUST FOR VEGANS – WELLNESS BENEFITS OF NUTRITIONAL YEAST

We often get the questions is nutritional yeast vegan, and the answer is yes. Nutritional yeast has long been a staple of vegan and vegetarian diets thanks to its high protein content — a single serving can pack a whopping 9 grams! So not only is it tasty, nutritional yeast is good for you . It also contains all essential amino acids, making it a complete protein like other elite superfoods such as quinoa and tofu. And depending on the kind of nooch you’re using, it can be fortified with additional vitamins like B-12.

For vegans, vegetarians and omnivores with allergies and sensitivities to gluten, soy and/or dairy, nooch offers an easy and delicious way to get nutrients they can’t find elsewhere. But it’s not only good as a substitute for things you can’t have — it brings something entirely new (and delicious) to the party.

HOW IT’S MADE – WHERE DOES NUTRITIONAL YEAST COME FROM?

This savory treat has surprisingly sweet origins. Frontier Co-op cultivates our nutritional yeast in certified non-GMO molasses — although there’s no actual sugar in the finished product. Once the yeast is ready for harvesting, we wash it, pasteurize it, then dry it with heat to deactivate it. From there, we crumble it into flakes or a fine powder.

All nooch is made from the same species of yeast — Saccharomyces cerevisiae — but it can come in a variety of forms:

Nutritional yeast comes in both flaked and powdered forms. While the type you use often comes down to personal preference, a recipe might specifically call for one or the other — although they’re typically interchangeable.

Powdered nutritional yeast is generally a good choice when you’re adding it to sauces, soups and other liquid-y applications where it needs to dissolve and mingle with other ingredients. On the flip side, big, flaky nooch makes for a more appetizing, Insta-worthy garnish.

That said, you should be able to use either form for either application with equally satisfying results. Just keep in mind that a little of the powder goes a long way — you only need about half as much as the flakes. (1 tablespoon flakes = 1/2 tablespoon powder.)

Nutritional yeast is already rich in vitamins, minerals and antioxidants, but fortified blends offer additional nutrients, including the holy grail of vegan supplements — B-12. Since B-12 is usually only found in animal products, many people who don’t (or can’t) eat meat, seafood, dairy or eggs turn to fortified foods and supplements to round out their diets.

If your reasons for using nutritional yeast go beyond adding yummy umami flavor to your favorite snacks, consider using a fortified blend.

Powdered or flaked, nutritional yeast packs a wallop of flavor — all on its own — to whatever you put it in. But it also plays well with other herbs and spices. In fact, Frontier Co-op offers three ready-to-use, pre-seasoned blends that feature some of our favorite flavor combinations: Himalayan Sea Salt & Apple Cider Vinegar, Dill & Vinegar, and Nacho Spice.

Nutritional yeast is equally good in its unblended and blended forms. But if you’re looking to shave some time off your meal prep, blended nooch can save you the step of measuring out multiple spices and cleaning all those little spoons.

Himalayan Sea Salt & Apple Cider Vinegar Nutritional Yeast – features a bold, tangy pop of Himalayan sea salt and apple cider vinegar that’ll wake your taste buds right up! Try it in a creamy, lemony dressing and drizzle over kale for the most insanely nutritious and outrageously delicious salad you’ve ever tried. Mom would be proud.

Dill & Vinegar Nutritional Yeast – this nutritional yeast blend packs a delightfully zesty punch with dill and vinegar notes that shine through. This blend is begging for popcorn, but it also makes for a nice surprise in your favorite Chex mix recipe.

WHERE TO BUY NUTRITIONAL YEAST

Nutritional yeast can be found at most natural grocery and health food stores. You can also buy our wide selection of nooch directly from us.

Nooch is great sprinkled on popcorn on mixed with mashed potatoes but it can be a key ingredient in many recipes. Our favorite recipe is vegan sweet potato macaroni and cheese.

Nooch is great sprinkled on popcorn on mixed with mashed potatoes but it can be a key ingredient in many recipes. Our favorite recipe is vegan sweet potato macaroni and cheese. 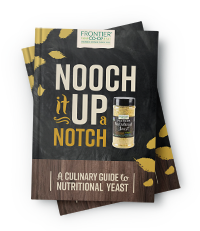