The ultimate in fusion cooking, Peruvian cooking is a combination of Incan staples and influences from Spanish, Chinese, Italian, French, African and Japanese cuisines!

While the main ingredients are maize (or Indian corn) and potatoes, you'll also find an abundance of other foods, depending on the specific locale. Three main geographical areas define the varieties of Peruvian cooking: the coast (with a focus on fish and seafood), the Andean highlands (meat and potatoes, corn, rice, noodles and breads), and the jungle (fruits, plants, yuccas, rice with fish and meat). Vegetables include tomatoes, avocado, asparagus, spinach, and many roots and tubers. An abundance of dried and fresh fruits appear in both sweet and savory dishes. These include such as passion fruit, bananas, prickly pear, cocona, lucuma, mangos, pomegranates, and aguaymanto. Almonds and walnuts are two of the main nuts, while chickpeas, lentils, and broad beans appear frequently in the legume category. A variety of meats, fish and seafood, poultry, and grains (such as quinoa, wheat, barley, and rice) are also enjoyed.

Chili peppers are a definite staple, too, with over 300 varieties found in Peruvian cuisine. Those most commonly used are the aji chilis (or pimiento chili), including aji amarillo (yellow pepper), aji limo (a small, very hot pepper), aji mirasol (a dried aji amarillo), and aji rocoto (which looks like a little bell pepper but—very unlike the sweet bell—is very hot).

Lunch, served at home, is often the main meal of the day in Peru. And cooks don't shy away from elaborate dishes. Several sauces and dips are included at each meal, for example. These include salsas, relishes, hot pepper sauces, huacatay paste, and cheese sauces. And Peruvians love snacks, starters, and appetizers. Snacks include roasted and salted corn, nuts, and beans, popcorn, banana chips, and churros.

Peru's national dish is a starter dish called ceviche (or cebiche). It's made with raw white fish cut into pieces, marinated in lime juice and spiced with chili peppers, onion, and salt. It's served with sweet potatoes, corn, and raw onions. Other starters and appetizers include grilled meat skewers, causa limena (mashed potatoes and vegetables and fish or chicken), empanadas (pastry stuffed with seasoned ground beef, or chicken), tamales (a dough/meat, cheese, chili, veggie mixture wrapped in banana leaves), and tequenos (a wonton wrap filled with cheese and other tasty ingredients).

Desserts include cookies (alfajores, which are butter cookies with a caramel-like filling and turron de Dona Pepa, which are anise cookies soaked in cane syrup and topped with candies), puddings (rice pudding and a caramel-like pudding topped with meringue), cakes (including a sponge cake soaked in milks and a rolled cake called pionono), masamorra morada (a jelly-like treat made with fresh and dried fruits and purple corn), and picarones (squash or pumpkin donuts served with cane syrup). 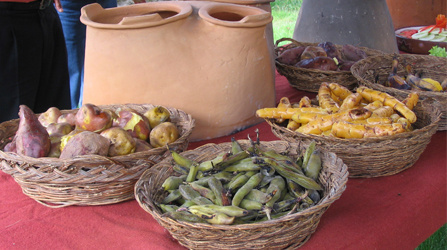